The house is located in Golfo Aranci, in the province of Sassari, in the north east part of Sardinia. We are in the residential complex of S'abba and Sa Pedra, at the entrance of the resort, in the area of ​​Baia Caddinas, in a wonderful naturalistic context where the scents of the Mediterranean scrub mix with those of the sea, creating a unique atmosphere. The area is very private and quiet, about a kilometer and a half away from the village, surrounded by greenery, with a communal swimming pool with sea life and small beaches inside the residential complex, which then open onto larger beaches, such as the beach large that is one kilometer from the house and can be reached via a path, on foot.

The house outside is built in exposed Sardinian granite and surrounded by the well-kept greenery of this complex, we are on the ground floor of a house on two levels, outside we find a garden with a green lawn and a veranda with garden furniture that it gives a lot of privacy to guests.

Etrando we find a living room with a dining area and a satellite TV, a nice and good quality furniture, with many references to the sea, proceeding we find a kitchen with fridge, freezer, dishwasher, microwave, four burner hob with oven and utensils cooking in quantity. Proceeding in the corridor you reach a bedroom with two single beds and a bathroom in the corridor with a small bath tub, toilet and bidet. Also from the entrance there is access to a second double bedroom with sea view and an en suite bathroom with toilet, shower and bidet.

The greatest spectacle is to be immersed in nature but in a complex with attention to the smallest details, the large condominium swimming pool facing the sea dominates the Figari islands that rise into the sea of ​​the resort. From the small paths between the houses you get to small beaches inside the complex that allow you to have almost private sea areas.

The name is a mistaken interpretation made by the cartographers in the middle of the 20th century: Gulfu di li Ranci, meaning 'gulf of the crabs', became Golfo Aranci, meaning Gulf of Oranges. Or it may come from one of the numerous coastal 'gems', namely the beach of Sos Aranzos. The village extends along a strip of land in the sea, overlooking the gulf of Olbia, that ends at the base of Capo Figari, ideal for diving - especially the Mamuthone Rock and Capo Filasca - and trekking inside a natural oasis, the habitat of mouflons and rare birds, that includes the little island of Figarolo facing it. Up above the promontory, there are wartime fortifications and a lighthouse, the ‘Naval Semaphore', famous for Guglielmo Marconi's experiments (1932). In honour of the brilliant inventor, a granite sculpture, the Column of Light, was built in the village. The area was inhabited in the Nuragic period, as is confirmed by the sacred well of Milis (7th - 6th BC), and it later became a Roman port. From the beginning of the 20th century it was a freight hub and, from the 1960s, the second port of access from the sea to Gallura. The residential area, originally a fishing village, became a Municipality in 1979 and had a population of two thousand 500 inhabitants. Tourism developed considerably here, due to its location close to the Costa Smeralda to the north and the marine area of Tavolara to the south. You can admire a village with colourful little houses, taste the Golfo Aranci cuisine with its seafood specialities and typical Sardinian dishes and you can do some shopping on the lively promenade in the village centre, where the Parish Church of San Giuseppe stands out and is a destination for worshippers of Padre Pio. The patron saint is celebrated in mid-March. The most heart-felt festivity, on 15 August (Ferragosto), is the Assumption of Mary, linked to the fish festival.

Trips via sea or on land along trails lead you to spectacular coves with heavenly beaches and sheer cliffs overlooking the crystal clear turquoise waters. There are over twenty beaches, some of which are wild and others comfortable and well-equipped, like the Cinque Spiagge (Five Beaches), little havens of fine, white sand facing the village, one following the other. Moving towards Olbia you will find the Spiaggia Bianca (White Beach), with fine sand alternated with rocks, the lovely Cala Sassari, the fabulous stretch of Nodu Pianu, separated by a small path from the wild beauty of Cala Banana, the heavenly Baia Caddinas, the fine sandy coves of Terrata, the little beaches of Baia de Bahas, the little sheltered pools and the beach of the Baracconi (little shepherds' and fishermen's huts). Not far from Porto Rotondo there is the beach of Marinella, one kilometre of gentle mounds of soft sand, smooth rocks and an emerald green sea. Around Capo Figari, you will find the fine, golden sandy little beaches of Cala Moresca, the protected reserve of Cala Greca, a beach of pink pebbles hidden by cliffs, the delightful Cala del Sonno, where the fishermen take shelter, and Cala Sabina, a sandy shore with a Caribbean appearance, which you can get to by train, which runs along the promontory. Set in the depths off the shore of the third beach, there is the MuMart, an underwater museum of contemporary art, which can also be visited when snorkeling. The Mizar submarine completes the show and, from it, you can admire an 'open sea' aquarium. Also located in Golfo Aranci, is the International Centre of Research into Dolphins, who will delight you with their acrobatics.

Final cleaning: 80 €
Dishes and glasses have to be rinsed clean, the garbage sorted and packaged, and the house swept clean.
Some owners charge a fee if the house is not left properly.

rent for an additional bed: rental free of charge

Due to fire hazard smoking inside is not allowed. 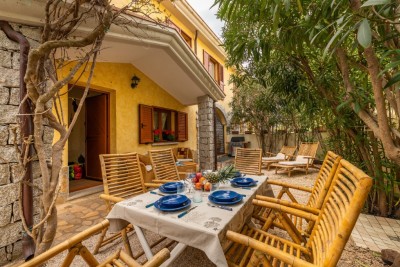 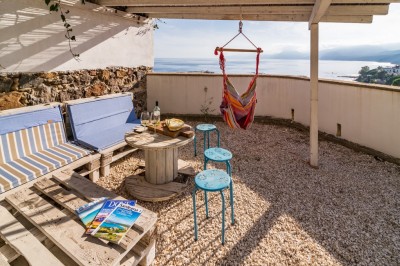 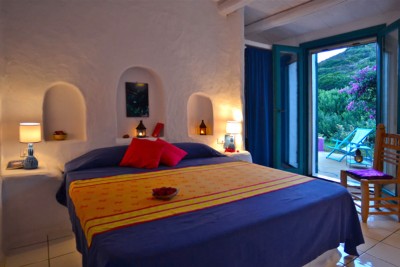 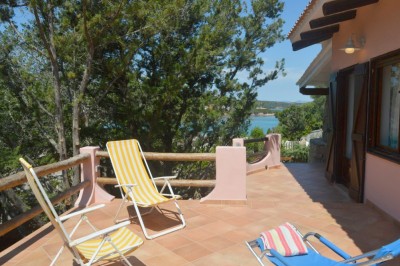 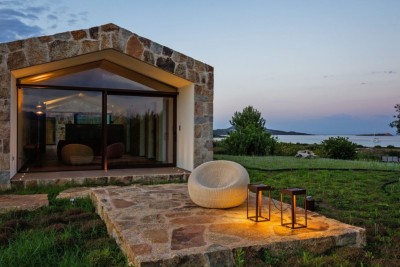 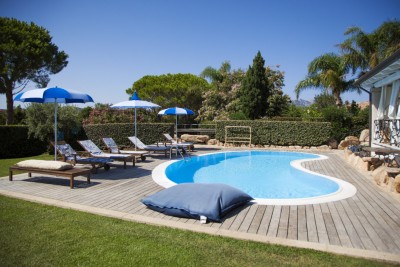 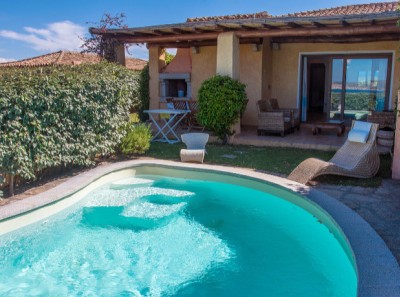 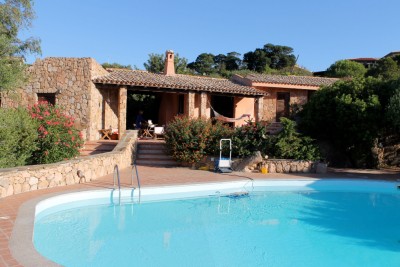 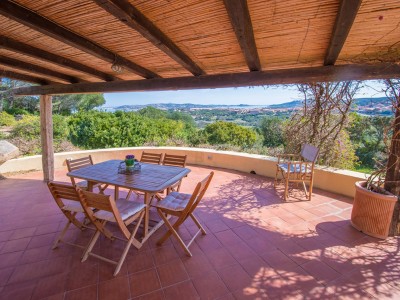